Today Food Security is a widely- used common term and is often relating to Climate Change Effects. But it is a combination of many factors with the initial source of energy for all biological systems. In the process of photosynthesis, solar radiation energy is transformed into chemical energy; the later is then converted to mechanical and thermal energy through metabolism. Herbivorous obtains necessary energy by digesting plant tissue and reserves, while flesh-eating organisms digest animal food, through a number of links, called “food chain” which may be up to five and then the energy flow gradually abates as it passes through the ecosystem . However, the primary producers, the plants take carbon dioxide and oxygen from the air, and the other nutrients from the soil, the overall source, except a few exceptions of some aquatic plants where they can obtain nutrients from dissolved water. 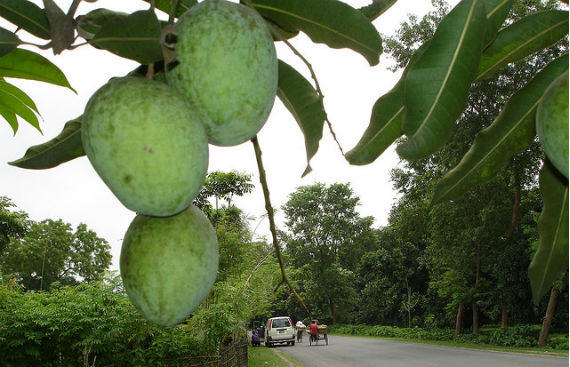 Every plant species or varieties have their individual characters depending upon their nutrients. For human being, the same phenomenon implies. However, mere carbohydrates rich food viz. rice, wheat, maize or potatoes are the food which can only supply the primary energy but not many other specific nutrients. There are many other plants which provide many nutrient elements according to availability, habit and habitats and of course heredity and adaptation. Spatial and dimensional structure: vertical and horizontal distributions of plants’ structure influence the growth, biomass production and other characteristics along with environmental factors.

Before starting of cropping culture, trees were the main source of food and nutrients. It is true that the depth of soil is a highly influential factor in production and yield. Therefore, most of the tree crops are more productive than the field crops. Trees are important food crop provides not only energy but also the vitamins, oils, minerals, alkaloids, phenolic compounds etc. Most of the trees are perennial, need little care, use large root zone for up taking nutrients. Therefore, for human food security, trees also play very vital role. Tree food may be fruit, flower, seed, leaf, stem, bark or root and food trees may be small, medium or large trees. Trees may grow on the highlands, lowlands and flat-lands; may be in the light, partial shade or under shade. They ensure the best utilization of soil and space. Many of the trees have mycorrhizal association for sustaining life in adverse conditions.

The importance of fruit in the human diet is universally recognized. Tree fruits are not only delicious but also valued for their vitamins and mineral content without which the human body cannot continue to be healthy or resistant to diseases. Many fruits are an excellent source of vitamin C and A, and as they are not cooked, provide high nutritious value. The pectin and cellulose stimulate the intestinal activity and protect the human body against various disorders.

Other than food, many trees possess other functions viz. windbreaks, shelter-belt, shade, humidity and temperature control, hedge, erosion control and soil formation. They provide timber, fuel, medicine, shelter and support for other plants, insects, birds, reptiles and many other animals and also used for ornamental purposes, etc. Trees have special function to reduce the greenhouse gas, carbon dioxide in tree structures for longer period. Total leaf area and leaf area index (LAI) is much higher than that of the field crops and the photosynthetic capacity at different wavelength is also more. Thus it is obvious that trees have the more adaptive capacity than the herbaceous field crops.

Most of the food trees are evergreen having a crown, bushy, spreading, branches and with dense green foliage. Well-laid food tree plantations create pleasant environment for the homesteads, office premises, institutions, and roads and highways. Thus the food trees play an important role in reducing the environmental pollution and dusts and provide micro- and macro-climate with biodiversity.

There are many more food-tree species which are used in different locality, especially in the hilly zones of Bangladesh. Rural people in and around forest areas depend on a large variety of forest products for subsistence. They include leaves, seeds, and nuts, fruits, roots and tubers, sap and gums, tree associate edible fungi and animals. Forest foods often increase in importance during the hungry season, which reaches its peak just before crops are harvested, and when crops fail. We need to find out all the edible tree species for food and nutrient security. Moreover, it is very unfortunate that in the name of tree plantation many exotic species viz. Acacia, Eucalyptus, Epilepil, Mahogany, Sissoo and Rain tree etc. were planted along the roadsides even in the homesteads and cropping fields as they are easy to grow, non-palatable and for short-term return without considering their bad impact on nutrient supply and delayed recycling of biomass. We had unique plantation choices for our homesteads in the early 1960s. Every home have had fruit trees e.g. mango, jack-fruits, blackberry, coconut, Areca nut, Palmyra palm, Bael, Bullock heart, Elephant apple, Hog plum, Pommelo and Lemons etc. These were the main sources of nutrients of the villagers. But the poor farmers were insisted by the so-called environmentalists and replaced them with some fast-growing exotic ones for short-term benefit but the consequence is the sufferings from malnutrition. It is not too late to achieve the food and nutrition security by reviving our traditional food tree plantation.

From the above list we should take immediate action to grow food tree crops to solve the food and nutrition crises as an important part of food security. The most important thing is we should know the domestication processes, nursing, association, habit and habitat which were traditionally developed following trial and error methods for long time practice, may be hundreds or thousand years. We need to study the traditional cultural practices and management of the food tree plants. The tribal and hill-regional people have their own food habit and we should explore their cultural practices and wisdoms to extend and enrich our food species especially the tree foods. It can be concluded here that food security can only be achieved by ensuring nutritional security for which we need to consider the innumerable value of food tree plants.